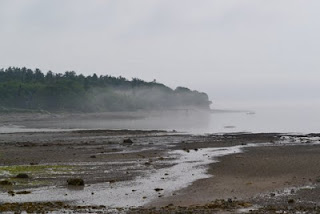 Under a gray sky
thick with clouds,
dampness brushed
against my legs,
as I put my hand
over my heart
a chorus of birds
joined me in prayer
as I thanked God
for another
day.
Posted by travelinma at 3:53 AM 3 comments:

You Are My Soul

Yesterday the deer grazed on the edge of the cemetery looking in, just waiting. Tonight they were not in sight. I sprayed more deer deterrent around the pot a radius of about two feet.
Yesterday I went to the greenhouse Jerry frequented where the owner knew of his purchasing habits. The man liked flowers. This time of year he would purchase dusty miller, geraniums and lobia. The owner reminded me of Jerry's love of yellow daisies. I chose another purple trailing flower to drape over the edge of the pot to adorn his grave. 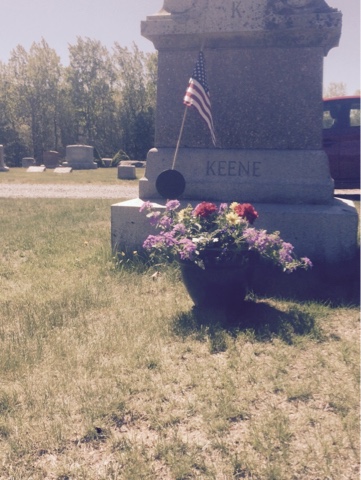 Jerry's best friend Dennis and I created the arrangement. Tonight I drove to the  cemetary alone.  I sat. I prayed and then I spoke to Jerry.   While watering the flowers a song popped into my head and I began singing," You are my heart you are my soul, you are my breath when I grow old, you are my lover, you're my best friend, you're in my soul." What a perfect song for the moment. I laughed right outloud.
Posted by travelinma at 6:43 PM 2 comments: 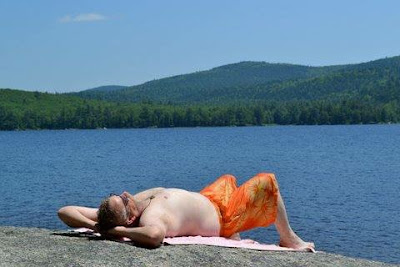 Maine winters hang on. Just last week (the calendar says May), I was wearing boots and wool socks.  Today as we prepare for highs in the mid-70's everyone is wearing short sleeves.  Meanwhile, my winter jackets remain by the door.  "I think I will switch out my winter clothes for summer," I remarked to another teacher. Suddenly, I felt a pang of sadness deeply in my gut.

Jerry's winter clothes never came out of storage this year- the first time unworn.  As I prepare for warm weather and the passing of yet another season, his brightly colored swim trunks will remain in the closet. Even after seven months since his passing, I still have moments when I think he is coming home.  I think he will wear his brown 'Upto Camp' tee shirt while we both scramble into the truck loaded with fishing gear and food and head to camp.  Once we are on the dirt road, Jerry will roll down the window for Rex who is panting with excitement.   Our dog loves camp as much as we both do; this place where my husband has spent every summer since he was four years old.  This summer will be one of bittersweet firsts.
Posted by travelinma at 7:38 AM 1 comment: 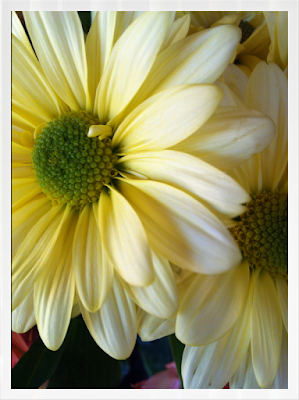 Relief from this pain,
I know will come
but not soon enough
for me
the crushing blows
are sometimes unrelenting
and ill-timed.

I just want to be rescued-
an impossibility.
Posted by travelinma at 4:09 AM 2 comments: 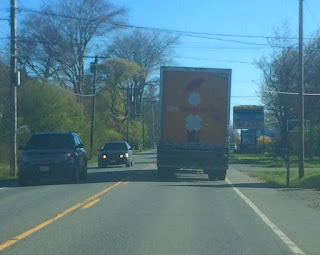 The message on this truck: RITZ: OPEN FOR FUN!

On Saturday, our middle daughter graduated with a Bachelor's Degree in Nursing.  She put herself through school (with her husband's help) while working part-time or full-time.  I'd say that is quite a feat.  Although joyous, the day pulsed with sorrow-missing my husband. The conflict of emotions was palatable. How great it would have been for him to be with us.  His laugh loud, I imagined his arms wrapping around our daughter, kisses marking her forehead, "I am so very proud of you.  You've worked so hard," he would draw her close.  How does one parent make up for the other's sudden absence?  I don't think this is possible.   I am me and I am not him.

I am the more practical, level-headed; I bet my kids would categorize me as boring in comparison to their father.   Feeling sad and a bit inadequate without him, blinking through tears, I look up and ahead spot a whole truck solely dedicated to Ritz Crackers.  Don't you think this is odd?  That was my first reaction and then it reminded me how much my husband loved Ritz. He would sit and eat a sleeve of the buttery crackers at a time.  The message is fun.  Fun can be infused into my life. Spontaneity can still be a part of my life too.  So can joy.

Then I remembered the first minutes of this day.  After a few slobbery kisses across my nose and lips from my dog Rex, he rolled over for a rub and wagged his tail furiously, batting it across my face.  I laughed out loud. My head resting back on the pillow, I smiled.  Immediately my thought was, "I am happy.  It is a new day."  My husband's philosophy: Each day we are given is a gift.  He taught me so much, among the lessons...infuse each day with fun-each day is indeed a gift.  I certainly digested Ritz's public service announcement.  Thanks Jerry. 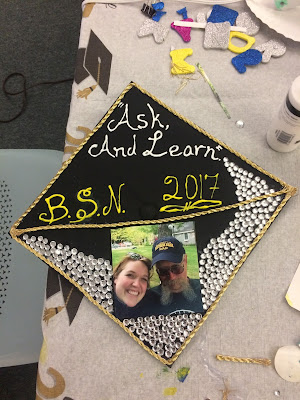 Facing Thanksgiving, Christmas and birthdays are hard enough; I was not prepared today for the constant heartache during such an important family celebration-my daughter's college graduation. Both my husband and I were so very proud of our daughter who was able to hold her own engaging in medical talk with the specialists at Dana Farber and Brigham and Women's.  Jerry and I were quickly lost in their consultation necessitating that Gabrielle skillfully translate day after day and week after week during our month-long stay.  We were forever grateful for her capacity to grasp a depth of medical knowledge elusive to us.   We are forever grateful for her ability to love and support us through one of the most difficult times in our relationship, preparing for the untimely end of my husband's life.

Today Gabrielle earned a Bachelor's Degree in Nursing.  Today I am carrying the lightness of elation as well as the somber, "'God, I miss my husband'-grief." Moments of empty silence throughout the day inflated my sorrow.

I prayed often.  I whispered to my husband to give me strength-crying in private, while smiling and laughing celebrating the accomplishment of our remarkable daughter.   Her father's death is shaping us both;  I know she is destined for great things. My husband always knew this. 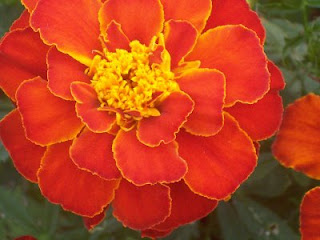 There was a time, a long time ago that a woman, a busy mother sat on a cushion and meditated.  This woman woke early each morning and from the perch of her yoga mat, she breathed, she stretched and smiled.  With this practice of prayer, meditation and yoga she felt balanced, strong and vigorous.  She took care of her husband, her kids (too many to count) and her mother-in-law.  This life was filled with responsibility, but she was able to find peace and contentment.

The house this woman lives in now has two dogs, four cats and a teenager.  Everyone else has grown up and moved out of the house to seek themselves.  The mother-in-law passed away, Alzheimer's robbing her of a life long before her body gave out.  And sadly, the woman's husband who was the love of her life died quite suddenly and unexpectedly leaving her mostly alone in the big house.  Wanting to take care of herself and ease the grip of grief, the woman remembered how peaceful and balanced she felt on her mat moving and then sitting and emptying her mind.  The woman felt good paying attention to her breath and reciting prayers of healing and light.  She remembers.

For a long time the woman was able to just think about doing yoga.  Weeks and months passed.  She thought and thought, but that is all she could do.  One day she bought yoga pants and a shirt.  The woman dragged her yoga mat from the closet.  Standing in the mountain pose, feeling tall and strong the woman breathed deeply, she stretched, she twisted and for a short time felt her body.  The woman's mind was occupied with her breath, her strength and all the possibilities that her daily practice brought her.

Sitting in a crowd of seventy people young and old who have lost loved ones, the woman was told by Rosie Dalton, a once grieving mother turned life coach, "Your only job is to take care of yourself-that is all you can do."  The woman took this advise seriously.